30 European transport associations, representing infrastructure managers, operators, local authorities, users and equipment suppliers in the maritime, inland waterways, railways, road, cycling, aviation and intermodal sectors, call on the European Parliament and the Council to approve the Commission proposal for the review of the Multi-Annual Financial Framework.

The proposal foresees an increase of EUR 1.4 billion for the Connecting Europe Facility (CEF) budget. The current proposal would contribute to enhancing the role of transport as an enabler of economic growth and job creation, which at the moment employs directly and indirectly 20 million people (10% of total EU employment).

Nonetheless, the transport sector warns that this cannot be considered sufficient to complete the Trans-European Network for Transport (TEN-T).The Connecting Europe Facility (CEF) is the financial lifeline of the TEN-T network. From a CEF total budget of 31 billion euros (2.8% of the overall MFF), only EUR 2 billion are left to co-fund transport projects of high European added-value until 2020. Due to an insufficient EU budget for transport and a significant reduction in national public investments, a large number of high-quality projects in the transport sector had to be, and will continue to be, rejected.
European citizens and customers require safer, ever more secure, reliable, efficient, green, multimodal and smart mobility but also better connectivity between nodes and modes of transport.

This can be made possible by modernising the transport sector and completing the TEN-T network. The TEN-T completion will create 10 million additional jobs and lead to 1.8% GDP growth by 2030 . The Commission and the Member States estimate that the development of the TEN-T network during the period 2014–2020 would require about 500 billion EUR of investments. These huge investment requirements in the transport sector should be taken into account by the current review of the MFF and by the future EU budget 2021-2027, in view of the review of the TEN-T Core Network implementation by 31st December 2023.

The providers and users of transport services and infrastructures, representing the public and private spheres of the sector, are ready to actively address these challenges but this requires a predictable and stable regulatory framework for investment and funding. Many high-quality projects are already benefiting from co-funding under the Connecting Europe Facility (CEF) calls and from financial blending programmes, but many other projects that are essential for the completion of TEN-T are lacking financial support.

Completing the TEN-T network will provide Europe with a smart, overarching and climate-friendly infrastructure plan. We, the representatives of the transport sector, are fully committed to making that plan a reality and we call on the necessary means to achieve it. There is not a moment to lose if we want to preserve and boost the competitiveness of European economy.

For more information, have a look at our campaign! 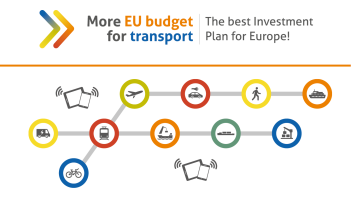