Most of our cities are crippled by congestion. The good news is that 50% of the EU population lives close to the sea and along rivers. That’s why water transport for passengers regains popularity in several urban areas. It avoids the expansion of road infrastructure and keeps up the quality of life.

In Luxembourg, the solar-powered electric ferry produces no emissions when crossing the Moselle river between Oberbillig (DE) and Wasserbillig (LU). Each year, the ferry will transport an average of 143,000 people – 66,000 cars – 1,600 motorcycles and almost 20,000 bicycles.

Another ground breaking concept is the Urban Water shuttle which also aims at alleviating strained public transport networks. The Urban Water Shuttle is an all-electric high-speed passenger vessel in development by NCE Maritime CleanTech, which has been awarded 11.7 million by the EU Horizon2020 programme. The first vessel will operate between Stavanger and Hommersåk on the west coast of Norway. The project will also conduct two studies for the same type of vessel in London and the inland waterways of Belgium. The vessel will be built in low weight and sustainable materials like aluminium, ensuring low maintenance and a long lifespan, and new manufacturing methods will contribute to 25% lower production costs and 70% lower engineering costs. The terminals will be equipped with auto mooring allowing for quick passenger loading and immediate battery charging. This means shuttles can stay continuously powered for long hours of operation. Its construction and maintenance costs of terminals will also be considerably lower than comparable land infrastructure. It is possible to develop different versions of the Urban Water Shuttle concept, but the initial project is based on a vessel with the length of 25-30m, for around 180 passengers and an operating speed of 20 knots.

In Paris, the Rocca 2, an existing urban cruising vessel is reconverted into an electric vessel and extensively tested. The company Vedettes du Pont Neuf plans to convert its entire fleet into electric vessels by 2024 when the Olympic Games take place. 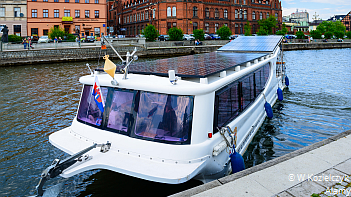