Today the European Parliament adopts a motion for resolution on inland waterway transport.

The resolution notes that, by 2050, 80 % of the EU’s population will live in urban areas, which will increase the demand for public transport and improved city logistics. It will be challenging and expensive to expand existing land infrastructure.

The Parliament therefore calls on the Commission and the Member States to integrate inland navigation in urban and port policies and to fully exploit its potential for transporting goods and passengers, given that many EU cities are located along waterways. This will reduce traffic jams and greatly improve the quality of life of citizens.

For existing infrastructure, the European Parliament inderlines the importance of increasing its performance and reliability. It also asks to prepare for climate change. These investments would be well spent money for economy and society.

The Parliament also recommends exploiting synergies between clean energy grids and waterway networks to make optimal use of hydropower generated at waterways, wind energy in ports and other clean energy sources at waterside mobility hubs for supplying transport, households and industries while minimising distribution costs.

Finally, the resolution stresses the need to fully support the greening and digitalisation in the sector and to exploit the full potential of inland waterway transport.

Therefore, the Parliament calls on the Commission to develop a follow-up programme to NAIADES II. This should be launched by 2020.

INE applauds the European Parliament for sending this important political signal to support the development of inland waterway transport with adequate policy measures and resources after 2020. 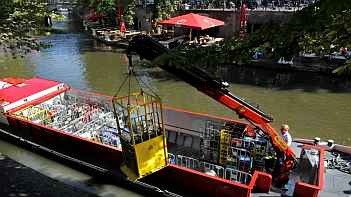