The European Commission and the Port of Antwerp allocated a grant to Dutch company Port-Liner to develop barges propelled by “e-Powerbox” battery driven electric motors which can be placed in any barge and are easily recharged or swapped. The first vessels will take to the water in autumn 2018.

Eleven ships will be built. 5 inland barges of 52m long are being built to operate between Budel (on the Belgian-Dutch border) and the Antwerp port taking 23,000 truck movements from the road. 6 inland barges of 110m long will be deployed between the ports of Rotterdam, Amsterdam, Antwerp and Duisburg. All ships have already been leased to large shippers, logistics service providers and large container shipping companies.

The small ships are suitable for sailing on the smaller canals in Belgium. They can sail for 15 hours on an E-powerbox the size of a 20ft container. Because electric engines do not require an engine room, there is 8% more loading space than on comparable vessels of the same size.

The six large electric barges are each 110m long and 11.4m wide. These ships can take 270 containers on board. Each ship has four E-power boxes on board, to sail 35 hours. Upon arrival at the container terminal, the batteries can be swapped. Battery charging takes four hours. The energy comes from green power sources making these vessels really clean. In a period of 10 years almost 350,000 tons of CO2 will be saved which is the equivalent of 174,000 return flights between Amsterdam and New York.

The project is supported by the EU Connecting Europe Facility CEF. The EU co-financing of 7 million covers the E-power boxes, the containers containing the electric batteries. 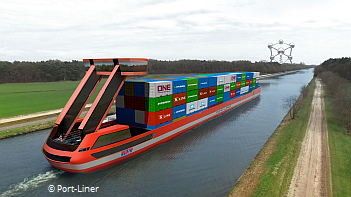