Last Friday in Ljubljana, the transport coalition of over 40 transport organizations, authorities, cities and industries including INE, handed Budget Commissioner Oettinger the declaration during the TEN-T days, which contained a strong plea of all involved to increase the budget for transport in the next MFF.

Karin De Schepper: “With 30.6 billion for transport including military mobility in the Connecting Europe Facility, we are relieved to see that the EU Budget Commissioner did not propose any cuts in times of Brexit. Investment in transport infrastructure delivers high added value for economy and society in the EU. If transport investments slow down, economy and society grind to a halt, because the EU freedoms of moving good and people, underpinning the internal market will be compromised.”

An increase in the EU budget is also extremely important for inland waterways which link up ports, cities and centres of production and consumption. By 2030, the core network for inland navigation infrastructure must be realised and European grants for public works are indispensable to achieve this goal.

The planned works for the elimination of bottlenecks and the modernisation of existing waterway infrastructure are estimated to amount to at least 15 billion euros in the period 2021-2027. These works not only make inland shipping more attractive so it can relieve the road network and reduce CO2 emissions from transport, but demonstrate the importance of inland waterways goes beyond transport.

Karin De Schepper: “Rivers and canals structure our landscape and are arteries of development in and across regions. Inland waterway projects are integrated strategies combining investments in transport and logistics with digitisation, automation, the generation of sustainable energy and supply, nature protection and anticipation to climate change delivering high added value to sustainable jobs and growth.”

The Commission proposal is the start of intense interinstitutional negotiations. The new budget will only be approved when the European Parliament gives its consent and the member states adopt it unanimously in the European Council.

Therefore, the MoreEUbudget4transport campaign continues during the entire decision-making procedure, and calls upon transport operators and users to join the transport coalition, to engage in the debate on twitter MFF4transport and to sign the petition.

INE will discuss further details, among others the military mobility action plan, with Commission director Herald Ruijters during the INE General Assembly of 18 May in Brussels. 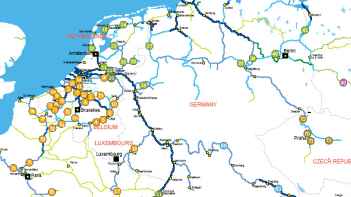