Northern Italy’s navigable waterways network, open to the Mediterranean from Gibraltar and to Suez and the Black seas through the routes and the ports of the upper Adriatic, leads to the heart of the Po valley, along the Po river and the canals connected to it.

The new Isola Serafini navigation lock is located in the river section on the Mediterranean corridor of the Trans-European network, on the link from Milan to the sea and from Locarno to Venice.

As well as being a new tourist attraction, the new lock plays a strategic role in providing a valid alternative for transporting goods currently carried by road or rail from the central Po valley to the Ports of Ravenna and Trieste, within a pan-European context of sustainable development.

This lock, the only one on the Po river, also featuring the biggest elevation of any lock in Italy, was designed to allow the pass of class Va vessels with a 2,000 tonne cargo, equivalent to 100 articulated lorries. It can be filled and emptied in 13 minutes.

Construction was contracted for 47 million EUR by Aipo and financed through Italian laws and loans from the Region of Emilia-Romagna, with 20% co-financing by the European Commission.

The technically and structurally complex work was completed in only 5 years, includes innovative solutions and enables vessels to transit between the free-flowing downstream section of the Po and the channelised upper section to Piacenza and Pavia.

The infrastructure is located beside the embankment on the right bankof the Po and cuts the wide meander that forms the Isola Serafini.

Great care has been taken to integrate the project into the surrounding landscape by creating green spaces and river basins, with harbours upstream and downstream equipped with floating docks and facilities for commercial traffic, pleasure sailing and leisure activities on the river.

A fish ladder was also constructed at the hydroelectric plant, part of a LIFe project, aiming to restoring the Po River continuity after the Isola Serafini dam stopped the natural movement of native fish in the middle-last stretch of the river. The value in fish biodiversity of the Po is among the highest for a natural watercourse in Europe (at least 48 native fish species) to which we can add the species settled in the dense hydrographic network linked to the river, more than 15 endemic and sub-endemic Italian species as well as 15 species of Community interest. This fish ladder is the largest ever built in Italy, which will allow restoring the migration routes of fish for hundreds of kilometers from the Adriatic Sea to Lake Lugano, in synergy with works of similar function implemented in recent years in the Lombardy Region.

The lock and related fish ladder,  form a riverine and environmental connection between the upstream stretch of the river Po and the Adriatic Sea. Sustainability, sensitivity to the environment and local landscape and development and innovation are the keys to this projects which connects Italy, through its waterways, to the Mediterranean and Europe. 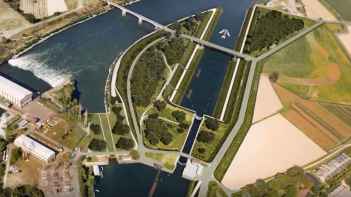