Power of water and wind

Lock complexes are becoming hubs for renewable energy. Pump installations that ensure sufficient water supply work also as hydroelectric plants. Together with windmills, they produce enough power to operate the locks and supply an increasing number of households in the region with green power.

One of the examples is the Albert Canal in the eastern part of Flanders connects the industrial zones around Liege with the harbour of Antwerp. Ships can continue their way at both ends of the Canal: via the River Scheldt to the Netherlands, and via the River Meuse to France. In the future, the Meuse basin, from which the Albert Canal receives its water, is projected to experience more and longer periods of lower river discharge and so less water available for sluicing ships. This limits inland navigation. In order to use less Meuse water for navigation, large and fish-friendly Archimedes screws were constructed at the locks which are pumping installation and hydroelectric power station in one.

The hydraulic cylinders enable the water used by the locks to be pumped back. Up to 48,000 cubic metres of water are displaced in a single lockage operation. In periods of low discharge on the Meuse, the screws can pump back the water lost due to the passage of a ship through the lock to the upper canal reach. In normal periods of enough discharge at the Meuse, the screws are used to to generate green electricity from hydropower. Each installation produces power that is used to operate the lock as well as supply around 1,000 households in the surroundings with energy. 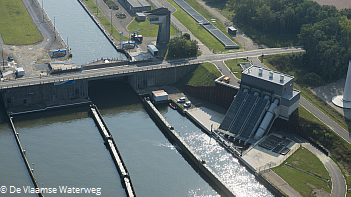