The Royers Lock dates from 1907 and is one of the oldest locks in the Port of Antwerp. Its dimensions are 182,5m long, 21m wide and 6,41m deep. Originally intended for maritime shipping, the lock was recently mainly used for inland navigation. As a consequence of the economies of scale in maritime shipping, the lock became too small for most maritime vessels.
But even for inland navigation, the lock has become rather small. For example, a convoy of four push-barges can’t pass through the lock..

Being in operation for almost 115 years, the lock is outdated and required a lot of maintenance in order to be kept in operation. After an incident in February 2021 (a push-convoy hitting the lock chamber wall) the lock was permanently taken out of service.

This caused hindrance for inland navigation, as the Royers Lock amounted for about 30% of the number of inland waterway vessels processed on the right bank of Port of Antwerp. The lock mainly catered for transiting traffic from/to the Albert Canal and the Schelde river in southern direction. These vessels are now facing detour costs and delays for being served at the other
– mixed inland and maritime – locks on the right bank of the port area. Waiting times for inland navigation willing to enter the Port of Antwerp or the Albert Canal have increased due to the closure of the Royers Lock.

Being planned already for quite some time, the Royers Lock will now be renovated and upgraded, to be better adapted to the size and needs of current day inland navigation. The permanent closure of the lock in February 2021 increased the urgency to start the works. The new dimensions of the Royers Lock will be 235m long, 36m wide and 6,41m deep.

Construction works have started in October 2021 and the lock is expected to be in service in December 2027.

The project is linked to the ongoing upgrade of the Albert Canal, which is the most important inland waterway in Flanders and Belgium. Royers Lock is located on the North Sea – Mediterranean Core Network Corridor. The project responds to the recommendation of Coordinator Balázs in his 4th Work Plan North Sea – Mediterranean, to keep working on the modernisation of the Belgian inland waterway network, in particular by eliminating capacity restrictions in locks. A CEF Transport contribution for these works will be pursued. 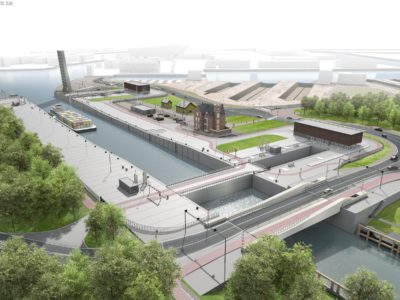