High level representatives from the European Union and from the inland waterways transport sector joined the VIP-event ‘Inland navigation and ports in action’ in Rotterdam at the TEN-T days in Rotterdam.

Official delegations visited innovative pallet barges with cranes on board, and the future of the sector, new generation of captains received their certificate to mark this memorable day.

Commissioner Violeta Bulc, responsible for transport, underlined the importance of inland navigation and ports and the necessity to create the conditions bringing more freight to the water, while Dutch Minister of Transport, Melanie Schulz highlighted the potential on European waterways. Patrick Renard, CEO of KNAUF Belgium, a wordwide specialist in sustainable building materials insisted to put the fastest grower after road transport at the top of the political agenda. 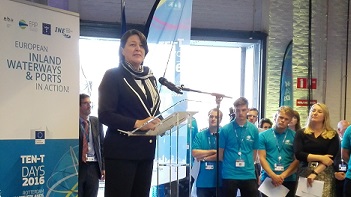